What is Season Solitaire

Game Season Solitaire was created with the theme of four seasons for you if you are a nature lover and like to admire the four seasons.

Play Season Solitaire, a variation of Solitaire with visuals and cards created for fans of the vintage style.

Your task is to arrange all the cards into the four empty Foundations piles by suit color and numerical order, starting from Ace to King.

Done this with all four foundation piles, you win the game! 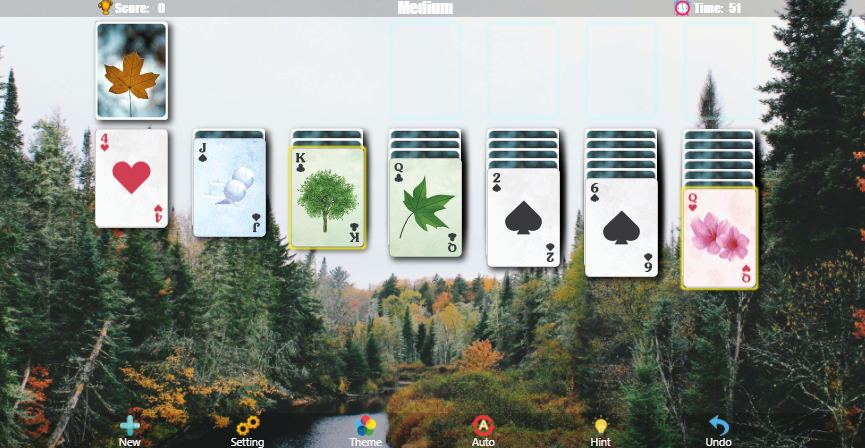 Tableau: There are 7 columns with already available cards; the first column contains 1 card, and in the next columns, the number of cards increases in column order. Of course, all first cards are open, and the following cards are reversed. When you take your first card, the following menu will automatically open until the bar has no cards left.

Foundation: Have four foundation piles, which are the four empty areas at the top of the game. Each pile represents a different suit and should be filled in order, starting with the Ace to the King.

How to move your cards when you’re playing Season Solitaire online:

Stack solitaire cards sequentially from ace to king by suit on the foundation piles. Each foundation must have the same suit.
Cards on the table can be placed on cards that are one higher than them and the opposite color. You can move multiple cards at a time as long as the entire group you’re moving is in descending order and alternating color.
Only kings or sequential groups that have a king at the top can be placed on empty columns.
Cards are dealt from the reserve to the waste one or three at a time, based on which you chose to start.
We have provided this full-range gameplay and strategies for you.

Season Solitaire is pretty easy to get started with and win.

Are you ready for the journey to conquer this exciting game?