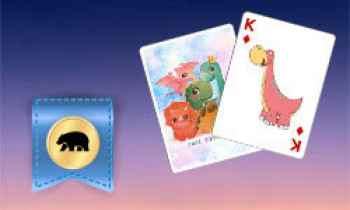 Spider is a solitaire card game where you arrange the cards inside the game in descending runs from King down to Ace in the same suit. No download required.

Spider Solitaire has three variety of options to play. Depending on the type, these will grow and decrease in difficulty (1 Suit, 2 Suit, and 4 Suit).

The game is played with two decks of cards with no jokers, or 104 cards, shuffled before each game in all variations of the game (1 Suit, 2 Suit, and 4 Suit). The cards are then arranged in ten piles or columns in a horizontal line, with six cards in each of the first four piles and five cards in each of the last six heaps. Each pile's last card is turned face up. Each pile gets one card at a time. So the first card dealt goes to the first pile, the second card to the second pile, and so on. The 11th card would be dealt with the first pile and so on until all 54 cards have been dealt.

Following the drawing of the face-up cards, the remaining cards are placed in the Stockpile and will be used to draw cards into the game. Tableau refers to a line of ten piles. Allow enough space above or below the Tableau for eight more piles, which will be known as the "Foundation," which is where you will be moving your card piles once you have finished the King through Ace descension.

You aim to arrange or sequence the cards in the columns in descending order from King to Ace along with the tableau. You slide the cards out of the tableau and into one of the eight foundations for each completed sequence. The game is won when each foundation is finished, with suit cards piled from King to Ace, and there are no more cards left.